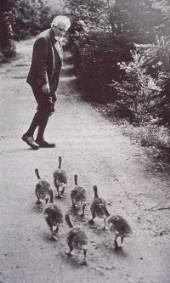 Method
Lorenz set up a classic experiment in which he randomly divided a clutch of goose eggs - where half the eggs hatched with their mother, and the other half hatched in an incubator with the first moving object they saw was the researcher Lorenz.

Results
The incubator group followed Lorenz everywhere, whereas the control group followed the presence of their mother. When the two groups were merged together, the control group continued to follow the mother whereas the incubator group diverted to follow  Lorenz. This phenomenon is called imprinting - whereby bird species that are mobile from brith attach to and follow the first moving object that they see. Lorenz identified a critical period in which imprinting needs to take place - which is within a few hours of hatching depending on the species. If imprinting does not hapen in this time, Lorenz found that the chicks did not attach to a figure atall.

Lorenz also investigated the relationship between imprinting and adult mate preferences. He found that those chicks who did imprint on a human figure, later went on to show adult mating signs towards humans at adult life stages. Lorenz described a case study in which a peacock that had been reared in the reptile house of a zoo, where the peacock imprinted on a giant tortoise. As an adult, this bird would only direct courtship behaviour towards giant tortoises, and Lorenz concluded that this meant the peacock had undergone sexual imprinting. 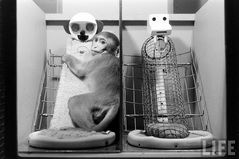 Harlow's research is arguably one of the most important research studies into attachment, conducting work with rhesus monkeys. These animals are a lot more similar to humans than Lorenz's bird studies, meaning the results are a lot more credible and reliable.

Method
Harlow tested the idea that a soft object serves some of the functions of a mother. In one experiment he reared 16 rhesus monkeys with two write model mothers. In one condition, the wire mother dispensed milk, whereas one wire monkey did not dispense milk, but was covered in a soft cloth.

Results
It was found that the baby monkeys preferred the cloth mother, even when in conditions that it didnt dispense milk. They south comfort from the cloth mother when frightened, and showed that contact comfort was more important to them than the food.


Harlow followed up the monkeys who had been deprived of a 'real mother' into adulthood to see how this early maternal deprivation effected them. The researchers found severe consequences, the monkeys reared with wire mother  were the most dysfunctional, but even those with the cloth mother did not develop normally sociable behaviour. They were alot more aggressive than normal monkeys, and less sociable and bred less than what is typical for their breed. If they did go on to be mothers, it was common that the monkeys neglected their babies. Like Lorenz, Harlow concluded that there is a critical period for this behaviour - a mother figure had to be introduced within 90 days of birth for an attachment to form. After this, attachment was impossible and the damage done by early maternal deprivation was irreversible.