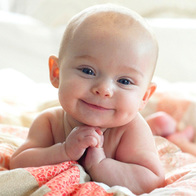 Schaffer and Emerson aimed to investigate the formation of early attachments, and in particular what age they occured.

The study involved 60 babies - 31 male and 29 female from working class families in Glasgow. The mothers and their babies were visited at home once a month for the first year, and then again at 18 months. The researchers asked the mothers questions about the kind of protest the babies showed in seven everyday situations. e.g adult leaving the room. This was designed to measure the babies attachment. The researcher also investigated stranger anxiety - the infants response to unfamiliar adults.

Between 25 and 32 two weeks, 50% of the babies shown signs of separation anxiety towards a particular adult - usually the mother. Attachment tended to be towards the primary caregiver who was most interactive and responsive to infant signals and facial expressions. (Recipricocity). This was not necessarily the person the baby spent the most time with. By the age of 40 weeks, 80% of the babies had a specific attachment and almost 30% and multiple attachments. 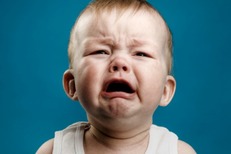 Stage One  - Asocial  Stage (first few weeks)
The babies behaviour toward objects and humans are quite similar. Babies do show some preference for familiar adults in that those individuals find it easier to calm them down. Babies also seem happier when in the presence of other humans.

Stage Two - Indiscriminate  Attachment
From 2-7 months, babies display more observable social behaviour. They show a preference for people rather than inaminate objects and recognise and prefer familiar adults. At this stage, they will usually accept cuddles and physical contact from any adult, and do not usually show seperation anxiety or stranger anxiety. Their attachment behaviour is therefore said to be indiscriminate because it is not different to any one person.

Stage Three - Specific Attachment
From around 7 months, most babies start to display anxiety towards strangers and become anxious when seperated from one particular adult. (The mother in 65% of cases). At this point it is said that the baby has formed a specific attachment, and this adult is termed the primary attachment figure. This person is not necessarily th person the child spends the most time with, but the one who offers the most interaction and responds to the babies 'signals'.