Circadian Rythyms are the body cycles that last around 24 hours, (daily) for example sleeping and eating patterns. There are debates, and a variety of supporting research over whether these cycles are controlled by endogenous (internal) or exogenous (external) factors.

Pineal Gland
In lower species (animals) the pineal gland is most responsible for controlling circadian rhythms. The pineal gland lies at the top of the brainstem and in lower species this means it is close to the surface of the skull. It contains light sensitive cells that recieve information through the skull about external lighting conditions - helping keep the animal synchronised with fluctuating environmental conditions. The pineal gland is responsible for secreting Melatonin - a hormone that influences sleeping patterns.

The SCN
In humans, the SCN appears to have an over-riding role over the Pineal Gland. The SCN is part of the hypothalamus, and regulates the manufacturing and release of the hormone melatonin from the pineal gland.(Sleep hormone).  The SCN is also connected to the retina in the eye, and monitors the amount of light to control melatonin release.

DeCoursey (1998) - Removed the SCN in chipmunks and returned to natural habitat. Monitored over the next 80 days - disrupted sleeping patterns and more chipmunk death than in the control group. Suggests the lack of endogenous pacemakers has an impact on health and survival.

Michael Siffre - (1975) 'Caveman Study'. -
Put himself into a cave for 63 days, with no natural light. He slept when he was tired and ate when he was hungry. The only influence on his circadian rhythms were his endogenous pacemakers. He maintained a relativley normal circadian rythym - although found it naturally extended to around 25 hours instead of 24. Supports endogenous pacemakers.

Aschoff & Wever (1976) -
Placed participants in WW2 bunkers, with no natural light and no indication of time. Participants regulated a circadian rhthym lasting between 24-25 hours, with some extending to 29 hours

Folkard 1985 -
Investigated the effect of manipulating zeitgebers on the sleep cycle. 12 participants were placed in isolation, away from natural sunlight and any presence of time apart from one clock. They agreed to go to bed when the clock showed 11:45pm, and wake up at 7:15am. Throughout the experiment the researchers changed the timings of the clock by speeding it up so a 'day' actually lasted only 22 hours. All but one of the participants adjusted their circadian rythyms to be in time with this new 'clock'. Although a small sample size, the study provided strong, significant results suggesting that external factors can override a natural sleep cycle. 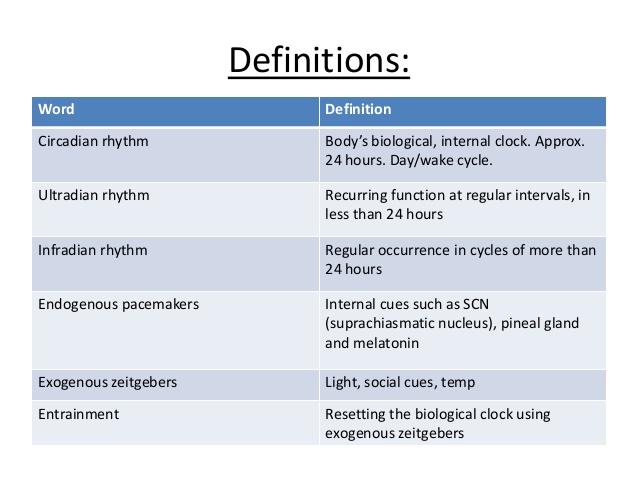