what is an attachment?

An attachment can be defined as a close two-way emotional bond between two individuals in which each individual sees the other as essential for their own emotional security. Attachment in humans takes a few months to develop. We can recognise an attachment when people display the following behaviours; 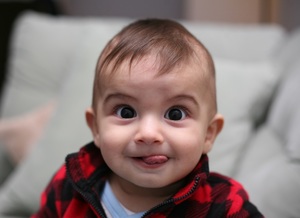 From an early age, babies have meaningful social interactions with their carers. It is believed that these interactions have important functions for the childs social development, and in particular for the development of the caregiver-infant attachment.

Reciprocity
From birth, babes and their carers spend a lot of time in intense and pleasurable interactions. Babies have periodic 'alert' states that signal they are ready for interaction. Mothers typically pick up on and respond to infant alertness around 2/3 of the time. (Feldmen and Eidelman, 2007)
From around 3 months old, this interaction becomes more frequent. It involves close attention to each others verbal and facial expressions. This represents reciprocity - the notion of noticing and responding to eachother. Traditional views have often assumed a passive role of the baby, but research suggests that the baby does indeed take an active role. Brazleton et al (1975) described this interaction as a dance - because it is just like a couples dance where each partner responds to each others dance moves.

Interactional Synchrony
Two people are said to be synchronised when they perform the same action simutaneously. Interactional Synchrony can be defined as "the temporal co-ordination of micro level social behaviour". It takes place in a way where carers and babies actions and emotions mirror eachother.
Meltzoff and Moore (1977) observed the beginnings of interactional synchrony in infants as young as two weeks old. An adult displayed one of three facial expressions or distinctive gestures, the childs response was filmed and an associated was recognised between the adults expression/gesture and the baby.
It is believed that interactional synchrony is important for the development of carer-infant attachments. Iisabella et al (1989) observed 30 mothers and infants and assessed the degree of synchrony. They also assessed the level of mother-infant attachment and found that high levels of synchrony were associated with better quality attachments. 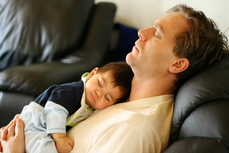 Parent Infant Interactions
Traditionally we always think of mother-infant attachments. Schaffer and Emerson (1964) found that the majority of babies did become attached to their mother first (around 7 months) and within a few weeks or months formed a secondary attachment to the other family members e.g the father. in 75% of the infants studied, an attachment was formed with the father by 18 months of age.

Fathers as Primary Carers
There is some evidence to suggest that when fathers to take on the role as primary care giver, that they adopt behaviours more typical of mothers. Field (1978) filmed 4 month old babies in face to face interaction with primary mothers, primary fathers and secondary fathers. Primary caregiver fathers spent more time smiling, imitating and holding infants than secondary fathers, this behaviour appears to be very important when forming attachments with the infant.