An example of an Infradian Rhythm we will learn as an example is the sleep wake cycle. The sleep cycle has multiple stages, with a full cycle lasting around 90 minutes. When studying the sleep cycle, an EEG is often used by researchers to montor brain activity through the different stages.

There are two different types of sleep:-

Stage One;
The light, transitional sleep. Drowsiness, and the 'drifting off' feeling of falling asleep. Very easy to disturb, or awaken at this stage.  Lasts around 10 mins.

Stage Three;
The transition to deep sleep, high amplitude delta waves. Growth hormone released during this stage. During this stage people become less responsive and noises and activity in the environment fail to generate a response. Bed wetting and sleepwalking are most likely to occur at the end of this stage of sleep.

Stage Four;
The deepest stage of sleep. Most dreaming (REM SLEEP) occurs in this fourth stage.

It is important to realize, however, that sleep does not progress through these stages in sequence. Sleep begins in stage 1 and progresses into stages 2, and 3. After stage 3 sleep, stage 2 sleep is repeated repeated before entering REM sleep. Once REM sleep is over, the body usually returns to stage 2 sleep. Sleep cycles through these stages approximately four or five times throughout the night.

On average, we enter the REM stage approximately 90 minutes after falling asleep. The first cycle of REM sleep might last only a short amount of time, but each cycle becomes longer. REM sleep can last up to an hour as sleep progresses. 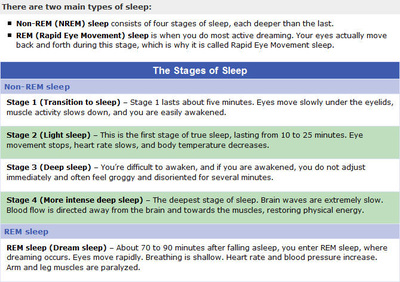